Dear AFF and Friends of SKIFF, This past Saturday morning I conducted the first SKIFF (Soldiers’ Kids Involved in Fishing Fun) program trip of the 2017 season. Aboard were Charley Elgin, age 13, and his nine-year-old sister, Addison Tinkelenberg. I first became acquainted with this family when Charley ‘s mom, Jessica, signed him up to... [ more ]

Dear AFF and Friends of SKIFF,

This past Saturday morning I conducted the first SKIFF (Soldiers’ Kids Involved in Fishing Fun) program trip of the 2017 season. Aboard were Charley Elgin, age 13, and his nine-year-old sister, Addison Tinkelenberg.

I first became acquainted with this family when Charley ‘s mom, Jessica, signed him up to go fishing with me through the Fort Hood SKIES Unlimited program.

As that trip concluded, Charley excitedly talked about his fishing experience which then caused his sister to want to give this whole outdoors thing a try. I also learned in talking with the kids’ mom that her husband, US Army Specialist Sean Tinkelenberg, was deployed as a scout with the 3rd Cavalry Regiment to Afghanistan. I let her know that I could take both kids fishing, all expenses paid, via the SKIFF Program.

Jessica hesitated on setting a date because her husband’s return date was drawing near, but was uncertain. As it turned out, specialist SPC Tinkelenberg returned to U.S. soil this past Wednesday just in time for Addison’s ninth birthday.

We continued on with our plans to take the kids out fishing Saturday, while Sean and Jessica used the morning to prepare for Addison’s birthday party to be held at the bowling alley on Fort Hood with a handful of Addison’s friends and, of course, her family.

Sean and Jessica were very, very appreciative for the opportunities opened to their children, and for the flexibility in scheduling to allow them to make the most of celebrating both Sean’s return after his nine month absence, along with Addison’s birthday celebration.

On the fishing side of things, we were able to land 67 fish, including 65 white bass, one largemouth bass, and one freshwater drum. The water temperature hovered at the season’s low thus far – right at 53.8 to 54.1°. This is still several degrees warmer than the average water temperature for this time of year, thanks to our very mild winter thus far. All of the fish we took today were taken either using an “easing” tactic near the bottom, typically upon our arrival at an area, or using a “slow smoking” technique for fish that rose off the bottom while following hooked schoolmates after we had fished an area for some length of time.

“Homefront” spouses with a husband or wife away from home on military duty (not just deployments) are welcomed to call me at 254.368.7411 to arrange for free 4-hour outing for your children. Homefront parents are always welcome to attend, but are equally welcome to take some downtime from their own children and leave them in my care for this time on the water. A huge thanks to the member of the Austin Fly Fishers for their support in leading the fundraising for this effort!

TALLY = 67 FISH, all caught and released 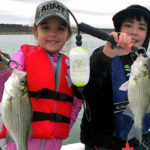